Steroid and small molecule-related hormones are largely endocrine factors that regulate almost every facet of vertebrate development, growth and adult homeostasis. They operate by controlling the transcriptional output of specific target genes at the molecular level in virtually every tissue and organ system in higher vertebrates. The activities of steroidal ligands are mediated by unique intracellular receptor proteins to which they bind with high affinity. These interactions prompt the subsequent associate of receptor-ligand complexes with the regulatory regions of genes where they function to recruit a variety of molecular machines capable of controlling the expression of target genes.

This is an accordion element with a series of buttons that open and close related content panels.

Thevitamin D hormone represents such a steroid hormone system. The hormone is famous for its role in orchestrating the regulation of calcium and phosphorus homeostasis via its actions on the intestine, kidney and bone. Thus, vitamin D deficiency leads to a reduction in circulating calcium and phosphorus levels that results ultimately in rickets, adult osteomalacia, and osteoporosis. The vitamin D hormone is less well known, but nonetheless important, for diverse actions in the skin, the regulation of immune function, control of cellular growth, and modulation of cellular differentiation. As with other steroid hormones, all of these pleiotropic activities are also mediated by a unique intracellular receptor termed the vitamin D receptor or VDR which acts within the nucleus of target cells to regulate the expression of numerous genes. Perhaps the clearest demonstration of the essentiality of the VDR in vitamin D action is the finding that singe point mutations in this receptor’s gene have been found to be responsible for a generalized vitamin D resistance syndrome in humans. Accordingly, tissues fail to respond to the vitamin D hormone despite the fact that its circulating levels in the blood are normal. 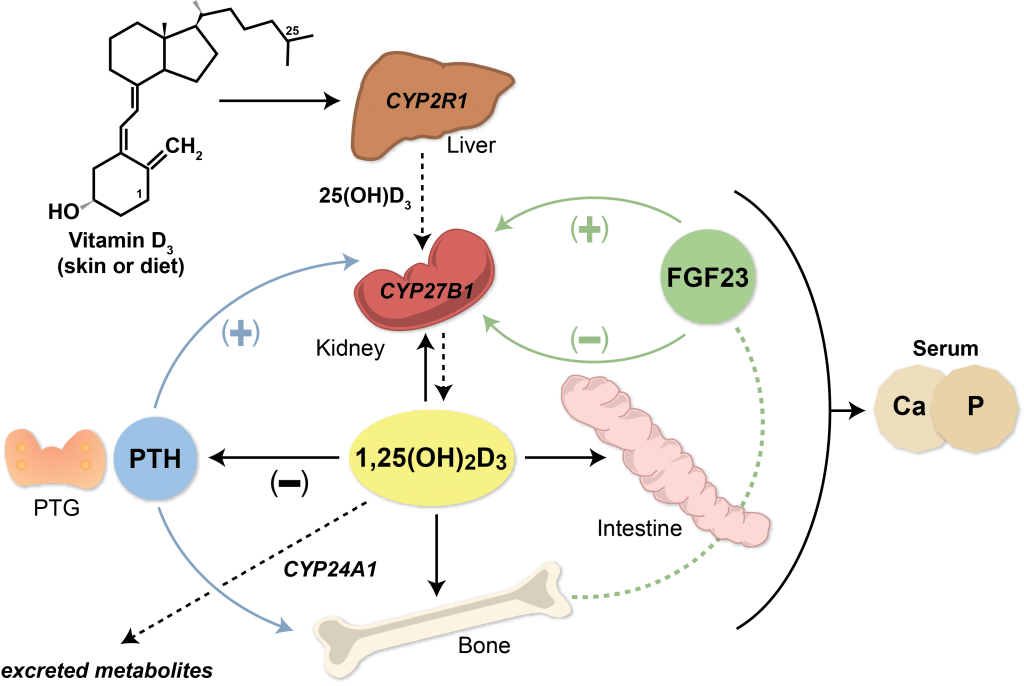 Our past studies have sought to understand how the vitamin D hormone, termed 1,25-dihydroxyvitamin D3 or 1,25(OH)2D3& for short, modulates the transcriptional output of target genes and, in so doing, orchestrates the intricacies of maintaining calcium and phosphorus homeostasis in mammals. We participated in the initial characterization of 1,25(OH)2D3 as an endocrine hormone and the discovery and characterization of its receptor, cloned the VDR’s structural and chromosomal genes and developed an understanding of how the receptor operates at the molecular level on target genes. These studies facilitated our finding, described above, that genetic mutations in the VDR gene were responsible for vitamin D hormone resistance in humans. These molecular studies of the VDR have culminated in the determination of the three dimensional structure of the 1,25(OH)2D3-binding portion of the receptor through X-ray diffraction analysis. These studies have led to a more complete understanding of how the vitamin D hormone interacts within the ligand-binding pocket of the VDR.

Recently, we have defined and continue to investigate key aspects of the molecular mechanisms through which the vitamin D hormone autoregulates the expression of its own receptor in certain tissues, and modulates the expression of a wide variety of additional genes whose protein products are integral to the biologic actions of vitamin D in numerous target tissues. These studies have been made possible as a result of newly developed methods whereby interactions of the VDR with target genes and, most importantly, the transcriptional consequence of those interactions can be assessed within intact living cells both in culture and in vivo. This approach, termed chromatin immunoprecipitation-deep sequencing analysis or ChIP-seq is an enormously powerful methodology which can be applied to the study of single genes, multiple genes, or to the complete genomes of a number of different organisms including those of mice and humans. These types of studies, coupled with a more focused examination of isolated regulatory regions and/or specific gene loci, and linked directly to genetic and transgenic animal studies, promise to further unlock the complex details that govern the mechanisms whereby the vitamin D hormone and its receptor regulate the transcription of genes involved in not the biology of calcium and phosphorus control, but that of skin, the immune system, and cellular growth and differentiation as well. Thus, we are poised to advance to a significant degree our understanding of how the vitamin D hormone 1,25(OH)2D3 operates in diverse tissues and at target genes to regulate important biological processes.

Most recently, we have transitioned our mechanistic studies to take advantage of the clustered regularly interspaced short palindromic repeats or CRISPR gene editing. CRISPR has already opened fascinating new doors into gene regulation that were only possible through complex animal gene deletion experiments. We are readily able to modify the genome any way we please by deletion of gene transcription enhancers, the full genes themselves, or even insertion of point mutations, corrective mutations, and reporter gene sequences. The possibilities for mechanistic studies are endless. Check out or recent publications list for how we are currently using CRISPR in the lab. Here’s a great introduction to CRISPR:

The impact of the vitamin D hormone on not only the skeleton, but at the immune system and on aberrant cell growth has led to the possibility that the hormone or synthetic versions of this molecule could be therapeutically useful for the treatment of a wide variety of diseases, not the least of which is cancer. As a result, a better understanding of how vitamin D operates in these conditions and which target genes are involved is likely to prove useful in the further development of efficacious drugs. One example is the capacity of 1,25(OH)2D3 to regulate the expression of RANKL, a gene whose TNF-like product is responsible for the production and activation of bone cells that function exclusively to resorb the skeleton. Indeed, the over-expression of this factor is often associated with& osteoporosis and appears to be involved in virtually all diseases of low bone mass. RANKL also provides a mechanism for facilitating tumor cell growth following metastatic cell migration from numerous primary cancers. Thus, an understanding of how RANKL is regulated by the vitamin D hormone and other cellular factors, a project with which we are involved, could well lead to the development of an inhibitor whose actions might reduce the expression of RANKL from certain cell types. This inhibition is likely to limit not only the level of bone resorption, but the capacity of the skeleton to provide a fertile environment for further metastatic tumor growth.

Steroid hormones such as the estrogens and androgens, whose primary roles are to control reproductive functions, also influence the mineral status of higher organisms. Thus, they contribute significantly to the regulation of skeletal bone mass by virtue of their ability to protect the skeleton from resorption. Accordingly, the loss of estrogens and/or androgens, a phenomenon that occurs in advanced age in humans as a result of either female menopause or male andropause, results in a striking increase in bone resorption, osteoporosis and eventually bone fractures. The protective effects of estrogens and androgens or their numerous analogs at the skeleton highlight their utility as perhaps the most effective current therapy for preventing bone loss in elderly postmenopausal women. In this area, we seek to extend our basic understanding of key target genes that are regulated in bone cells by these two hormones and the mechanisms that underlie their regulation. We anticipate that better drugs can be designed and developed based upon this information, and then utilized to treat more effectively bone-debilitating diseases.

To better understand the intricate details of vitamin D, estrogen and androgen hormone action at the cellular level, thereby facilitating the design and development of synthetic versions of these natural hormones with broad therapeutic potential.